You are here: Home1 / News2 / Research & Innovation3 / A Path to Phage Display

A Path to Phage Display

Find more about his research

Dr. Yi-Yuan Yang graduated from TMU with a degree in medical technology in 1983. He went on to earn a Master’s in biochemistry, and a PhD in Biology/Molecular Biology at Utah State University for the study of Bluetongue Virus in 1992.  But after a long period working in virology, Dr. Yang was looking to branch out to something new; he moved to University of California in San Diego to take a post-doc position doing research on autoimmune diseases.

At the time there were two major ways to make antibodies. The traditional hybridoma technique of isolating antibodies from immortalized B cells through purification tedious fusion and screening steps. It was a powerful process that lead to a 1984 Nobel Prize in Medicine and Physiology. But it’s not without certain drawbacks, like taking 4-6 months to produce useful amounts of antibodies and requiring extra steps for antibody humanization. Looking to find so-called “bad antibodies” behind autoimmune diseases, the UC San Diego group ran into problems when trying to produce antibodies using hybridoma technique. Dr. Yang’s advisor (Dr. Po-Jen Chen) therefore suggested a new technique involving fusing proteins to a viral shell that was first described in 1985 and under significant development at the Scripps Research Institute. With his advisor’s support, Dr. Yang was off to Scripps to become an expert in “phage display” technology.

In phage display, filamentous M13 bacteriophages (bacteria-attacking viruses) are genetically engineered to present a protein that can bind with a specific target. A specific antibody molecule “displayed” on the bacteriophage makes it able to attach to a target antigen. Then unspecific binders are washed out and antigen-specific phages are amplified. After several rounds of a bio-planning process are repeated, monoclonal antibodies with virtually any specificity can be isolated. The major difference between phage display and hybridoma technologies, says Dr. Yuan, is that “phage display uses molecular biology to clone the gene of the antibody from the antigen-primed B-cell. It’s a gene-level rather than cell-level technique”.

The technique has already been used to develop monoclonal antibody treatments like humira, which has sales of over20 billion USD as of 2018 and is used for autoimmune conditions including arthritis and Crohn’s disease.

When recruited to TMU in 1994, Dr. Yang had earned a reputation as a researcher in time for the SARS scare in the early 2003. With Taiwan and the world facing the “terrifying” danger of an airborne epidemic, Dr. Yang was assigned by then TMU President Chung-Yi Hsu to work closely with Wanfang Hospital and the Department of Medical Laboratory Science to explore possible diagnosis and treatments.

Using his knowledge of phage display techniques, Dr. Yang successfully constructed several phage antibody libraries that could be used for diagnostics and therapeutic treatments. Luckily SARS did not become a global pandemic, but Dr. Yang’s work published in 2007 both provided a basis for further SARS research and showed the viability of using phage display technology to produce mono -specific antibodies with high specificities from immunized chickens.,2

In 2009, Taiwan’s CDC was looking for a way to deal with another health danger: snakebites. Taiwan has six major species of venomous snakes that account for over a thousand bites per year. Effective antivenin treatments are available, but the traditional anti-venom antibody production system using horses is expensive, inconvenient, and risks dangerous side effects.

After having produced avian antibodies using phage display during his SARS research, Dr. Yang suggested using the chickens for their ease of care, low space requirements, and because chicken-derived antibodies may not be as easily rejected by the mammalian immune system. The plan was successful, and the team’s experience in phage technology was able to successfully develop mono and polyclonal antibodies for antivenin. Since 2009, Dr. Yang and his team have successfully used phage display to develop antivenin for all 6 species of venomous snake in Taiwan – results have already been published in several papers. 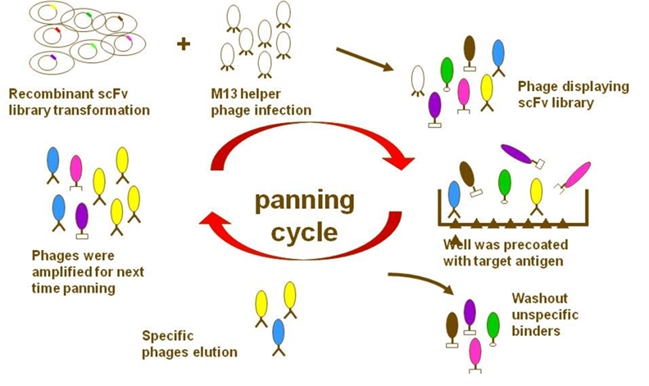 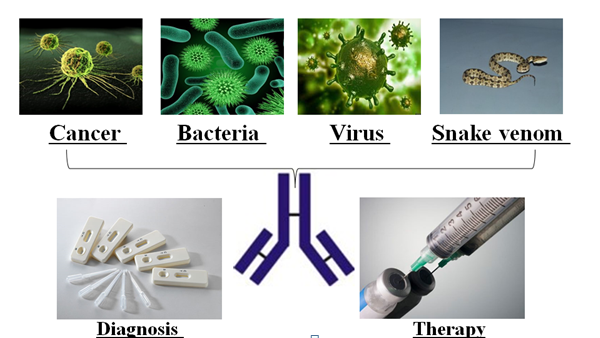 The Future of Phage Display at TMU

But while developing antivenin has been a successful implementation of the technology, it only shows partially the power of phage display to produce specific antibodies. Besides antivenin and treatments for infectious diseases,5-6 developing antibodies for cancer-specific biomarkers has more wide-ranging clinical application. In addition, the TMU antibody group is going to apply this technique to generate specific antibodies against tumor-associated antigen in domestic llama this year. says Dr. Yang.

Phage display technology is challenging to learn, but there are many opportunities in the biotech industry for those with the lab skills needed to develop and produce valuable antibodies for diagnostic and therapeutic applications. Providing our professional knowledge and advice to TMU colleagues for their research and, perhaps prepping students for job opportunities in the growing field of antibody research for therapy and diagnosis, is a major mission of our core facility. A lot of world biotech companies are interested in this technique … I would like to pass this technique to faculties and students who are interested in the antibody research and industry. It’s a very hot area.”

And as for students like Dr. Yang’s PhD now working as a post-doc fellow. “They’ll have no problem to find a job in a good biotech company.”

For interviews or a copy of the paper, contact us at global.initiatives@tmu.edu.tw.